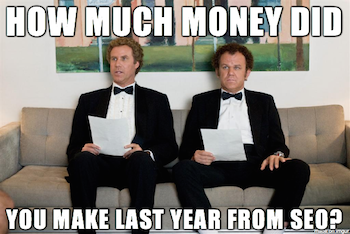 How much money did you make from SEO last year? Sorry for that uncomfortable question but you really need to look deep when evaluating where you’ve put down your roots. In this post we will be covering the process of choosing a profitable niche to gun after. We tend to glaze over and focus more on the means (link building on-page) instead of the long term profitability.

I’m just as guilty as the next guy, being a wreckless cocky blackhat trying to rank everything I can. If you’re decent spammer and work hard sure this can make you some cash but could there be more?

Hell yeah, and today we will explore those avenues. Putting on the big boy pants as they say and turning your SEO operation into something a bit more sustainable.

Now, you often hear people discussing the best approach whether it be white hat or black hat, and this is fine. But we don’t hear this argument discussed in the context of the niche. It’s just cut and dry, white hat is good, black hat is bad.

Well the truth is, they can both be bad!

It depends on the niche my friends, let’s take some examples of a couple markets I’ve played in: Coupons and Payday Loans.

Spam has always been a crucial part of ranking payday. It has become way more controlled over time though to the point where I decided to check out. At least in US and UK.

Coupons on the other hand has taken an interesting evolution as well, utilizing the same spam algos built for payday. It became very weighted towards the “big brands” in the space and when you have 5+ of them it becomes very challenging to crack the top 3.

In the past I’ve mentioned coupons in a podcast or two, but obviously never wanted to blow up my spot so I never blabbed about ranking them or any payday stuff. I’ve since hung up my hat in those markets, so no worries. For a couple reasons which we’ll dive into more, but first let’s break down the 3 areas of money making that can go down with your SEO.

One-off Commission – This is the majority of affiliate programs out there, you send someone to buy a product and get paid one time. Your payday loans affiliate, spending insane amounts of effort to hit big keywords and pull in some fat money. But don’t forget the book stops there.

Recurring Lifetime Commission – Maybe you’re seeing where this is going, maybe you’re going to get mad at me for the how obvious this all is. That’s ok, some people (myself included) need to get smacked across the face with things sometimes for them to set in. This category includes anything with a monthly recurring payment and this is EXACTLY what you need to be trying to hustle more of. In general the recurring bucks are the shit, but especially if you’re using spam.

Owning the Customer Yourself – This is that “easier said than done” example but is the biggest banker of all. What if you had your own landscaping business and were spamming local for leads? You have a really good run, pull in lots of business for a year, then the SEO gods smite you down with great vengeance and furious anger. Well, guess what? You still have all those clients who need their lawns mowed every week don’t you? Get the picture? If you use risky shit, try to maximize the return in the LONG run, not just the month of affiliate summit so you can buy bottles of Crystal and play the high roller tables.

That’s it really. Just think about how nice it would be to get paid for the lifetime of the customer vs one time. Then realize how it can minimize the amount of potential pie in your face when doing aggressive SEO.

Alright so back to coupons and some stories on the battle field. Then we’ll wrap up with some tangible methods for harvesting niche ideas.

Stories from the Battle Field…

Somewhere around 2009 I found coupon SEO for making money online. It was glorious, it felt like I had discovered fire. The process was just so damn simple, people search for a coupon, they’re ready to buy, they click to reveal a code and bang. They get a deal and I get paid, what could be better?

Well it started even simpler than that at a time where I was such a noob I didn’t even know how to install WordPress. Through my late nights researching ways to make money online I somehow discovered an affiliate program with a coupon that actually carried the sale action.

What that means is anytime someone uses the coupon you get paid.

From an affiliate management side it’s dumb as hell, so if you run a program NEVER do this and I’m about to explain why.

When I went to Google and searched the brand I wanted to promote with the word “coupon” I found RetailMeNot.com, a site I would later do battle with in secret on the SEO spam front.

This was the first time I ever laid eyes on this beautiful site which paved the way for many other coupon sites. My SEO knowledge was shit at this point, all I knew was this site ranked #1 and people probably went there when looking for the coupon.

So what did I do? In the sidebar, you can submit your own coupon, aha! I just submitted my coupon, but then I noticed holy shit, there are a lot of other coupons in here. What am I to do? 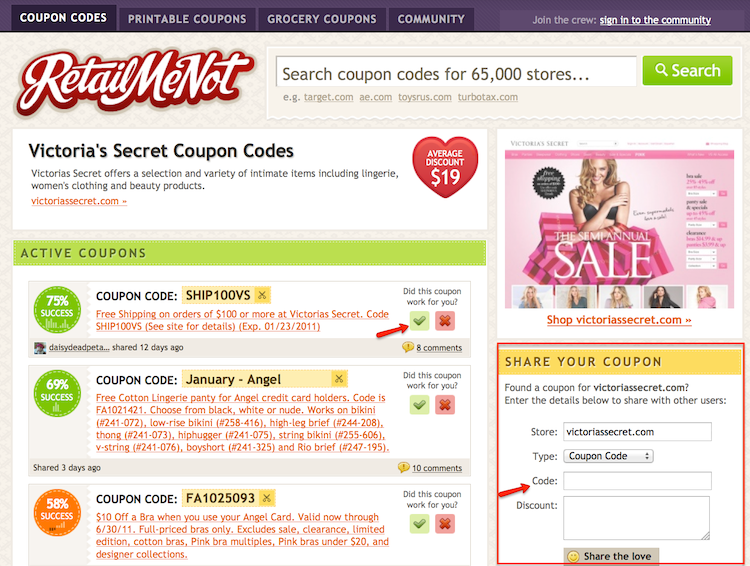 Check out archive.org if you want to take a peak at RetailMeNot’s evolution, it’s pretty cool.

The ripe young mind of a future SEO spammer and there I was discovering my first ever money making exploit. I was clueless, had no idea about creating bots or using proxies or anything of the sort. What I knew was a vote counted from different IP addresses and I had two feet. Two feet that I could use to walk to a bunch of different free wifi spots and give my code a quick vote. That’s how it started at least, hitting every IP on my college campus. Then I found every wifi location in Eugene, Oregon and made my rounds. Laptop in hand, I’d pop in to everything from coffee shops to bars, clear history/cookies and vote again.

Yup, we’re talking something a two year old could have done. So did it pay out? Hell yeah it did, in my first year I made several thousand dollars. Then I went on to find every single program like this that existed on the web (at the time) and repeated the process, voting for all my different codes. Eventually I wised up and tried to use Hidemyass but couldn’t get that to work. Manual voting it was then, haha, what a little scammer I was…

What did I know, I was walking around campus head held high feeling like a young entrepreneur. It wasn’t all peaches and cream though, a few companies got really mad at me. Some affiliate managers even lost their jobs from the gauging I gave them.

I shrugged my shoulders, I guess my killer marketing caused the code to get put on RetailMeNot, sorry bros. Eventually the big earners dried up and I needed more, I also had RetailMeNot cock block me and put up their own featured deal. All these factors combined led me to the light bulb moment of “maybe I could make my own Retailmenot”!

The rest is history as they say, the outline was written for the next 5+ years of my career. I even wrote a post back in 2012 about Google ventures having a stake in RMN just to fuck with them. The amount of money in coupons is absolutely insane, endless SERPs which can make anywhere from $5-$1000+ per day. Over that time I’ve seen all the big updates, but Penguin was the real game changer. Which eventually led me to hanging it up damn near all together in coupons with spam. And hey since I don’t smash in this niche anymore here is an easy way to find all the mega coupon keywords. Our friends RetailMeNot are internal linking a shitload on their homepage to their top coupon pages they want to rank.

Just go to the more stores section on the homepage and click the drop down. Feast your eyes on the glory friends. If you got rank chops I implore you, buy me a Rolex when you crack top 3 on a bunch of these SERPs. 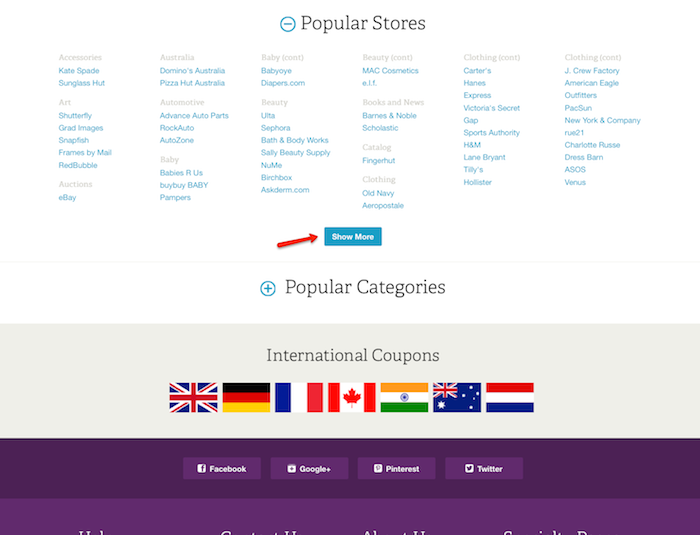 Now before you go calling me out for quitting coupons, let’s take a look at some of the big brands that have emerged over this time period. Combine this with the evolution of the algos and it’s made it an absolute ball buster to rank top 5 with PBN and GSA. A ball buster I decided to remove my balls from and invest them elsewhere recently. Golf clap to these sites, I secretly hate you and want to be you.

There are some more big players but these guys are absolutely owning it right now and Google loves the shit out of them.

So where did I go from there? Counter intuitively I went somewhere with MORE spam and things began to pickup again. That’s right, my spam worked better amongst other spammers vs trying to compete with these big brands that came in the scene. Now let’s talk about some actual ways to brainstorm niche ideas on your journey to making that SEO money. 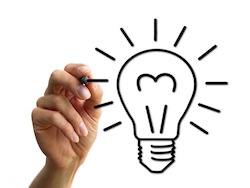 Go to Spam SERPS and Look at Blog Networks – Pretty self explanatory. Have you ever found yourself browsing through a public blog network domain and glancing at the anchor text people are using and different products they’re promoting. Check out some spammy stuff, like “buy twitter followers” comes to mind.

Sorry but consider your spot officially blown up!

Thumbtack Business Listing – These guys are trying to do SEO so hard it’s kind of ridiculous. Well, let their aggressive targeting be your gain. Check out this page, and feast your eyes on an enormous list of local service ideas.

Go to the big affiliate networks and look through categories and use some search filters.

There are plenty of others but those are the big 3.

Well there is a quick look into the geek that is me. The point is wouldn’t it be nice to work in an area you actually give a shit about?

Would you prefer getting out of bed everyday to sell penis pumps or something you’re truly passionate about?

Maybe you’re passionate about penis pumps and that’s fine, just realize it can pay huge long term dividends to be working on something that’s truly enjoyable.

That’s it everyone, nothing mind shattering. But it’s amazing how much I’ve fucked up this part of the process and done things totally guided by cash. Don’t be like me, life is too short, don’t do something you hate.