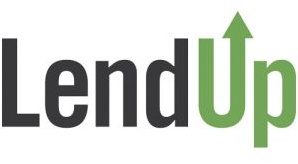 If you’re a hardcore SEO then you’ve likely taken a look at the payday loans search results over the days. It can be very revealing to see what the spammers are doing to rank in payday, especially shortly after an algorithm update. As regulations have changed in the US in recent years, myself and many others gave up on the US market and tried our craft elsewhere. Then eventually I gave up on the market all together since I was doing better elsewhere. When there isn’t one single affiliate ranking the top 5 on the main keywords, you know it’s rough out there.

Last year I wrote a story about Google ventures and their portfolio of sites being in some aggressive verticals. Finance was the big one that stood out, specifically the domains Lendup.com and Creditkarma.com.

Of the two domains, LendUp has been coming up on the radar a lot lately. They are crushing the SERPs so if you follow payday keywords then you know they’re dominating the “white hat” payday game. Then last week Google broke the big news that they would be officially banning all payday adwords advertising.

Wait what?! No more paid ads on those keywords, organic ranks or nothing? I’m seriously fighting the temptation to bust out my payday stuff and start grinding. But when you really take a step back and look at this I think we can officially stick a fork in this market and let Google have it.

You can read this article the CEO of LendUp published on the Google Ventures blog.
To summarize, he’s basically saying LendUp does things differently than everyone else and they are way cooler so it sucks to be you competitors.

That’s fine if you and Goog are bros. I’m not hating but shouldn’t you be playing by the rules with your site? 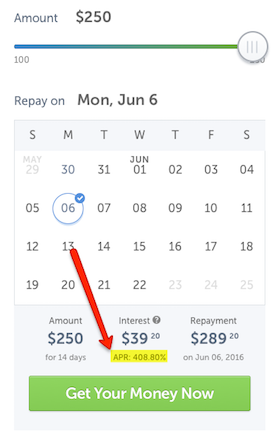 I mean that’s only fair right?

It’s kind of like the FBI investing in a drug cartel. We could debate the ethics of payday loans and the societal impact for days on end, but I’m not an expert on credit and finance so it would be pointless.

I think we can agree that this kind of loan is very risky and the person taking it is likely in a very bad place financially. Giving that person $250 and upwards of a 400% APR seems kind of like tossing them a loaded gun instead of a first aid kit when they already have a bullet wound.

But back on track, let’s stick to what we know about, SEO.

I wouldn’t call this “old school” but it’s definitely nothing new, scroll down and you’ll see all the landing pages.

Well hello there, that’s quite a few landing pages for pretty much the exact same thing. Do you really think users need a separate page for “fast payday loans” vs “easy payday loans” or is that just pure search engine candy? Well considering they are page 1 for both queries with the landing pages I’d say it’s working.

And tucking content away behind the reveal click? I thought John Mueller said they discounted that. Well don’t believe everything you read right? 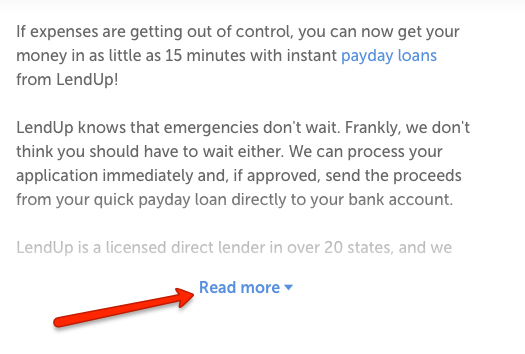 Looks like an average 300 words of unique rambles on each landing page. You see, this is how you rank a site. No bullshiting around. No reading the latest 17 actionable on page tips, just look at what is ranking!

Look at this page, so straight forward.

I’d probably reduce the amount of mentions on the exact keyword down to 1-2 but overall this page is perfect.

See how content is king? You just need a bunch of filler bullshit on all your landing pages with your juiced domain and you’ll be king.

That must have been pretty boring to write 20+ of those.

But wait, there’s more. Take a peak that their sitemap.

Or use this query – site:lendup.com “payday loans”

Hitting those local loan keywords also with the same strategy. Even noticed my college town Eugene Oregon, those hippy legal pot smokers are definitely going to need some payday loans.

This is pretty clean, notice the related pages on each state landing page. They link to the other geo specific pages for that area.

Well I’m not just going to give them kudos all day, but hey it’s good work. So what’s the big deal? They are doing good SEO, what’s all the whining about?

It’s hard not to think something is funky with the ad ban and this site never spending a dime on paid ads. It’s almost clairvoyant.

.@LendUpLoans was never heavy on PPC. If they didn't know this was coming, they sure happened to get lucky @GVteam pic.twitter.com/e8ql9DD426

According to SEMrush they have spent a total of $401 on paid advertising to date. So they’ve never run Google ads.

Correction, I was just informed on Twitter that they use a different domain for paid traffic.

@IMJacobKing we use a different domain for SEM :)

And take a look at their SEO growth.

Total conspiracy or should I break out the tin foil hat? You be the judge.