So What’s The Truth?

Today is different. Today we’re going to uncover the truth about neg SEO by showing a live case. The case shows that negative search spam works incredibly well and it’s fast; scary fast. The very foundation Google is convincing the masses to build on may not be so stable after all.

In fact, it seems so unstable that some neckbeard with a copy of Scrapebox can take it right out from under you. I’ve kept quiet for way too long about this, but this problem isn’t going to fix itself and I’ll be damned if I stand by watching hard working people have their sites destroyed because they don’t understand the realities of this system.

About 6 months ago some wonderful person decided to start blasting spam at my blog using a tool I’m very familiar with. As someone who has blasted millions of links for ranking my own sites, to say I’m familiar with this type of software is an understatement. Being in the game I instantly recognized the default anchor text and link types they were building. Let’s take a look at their handy work, shall we? 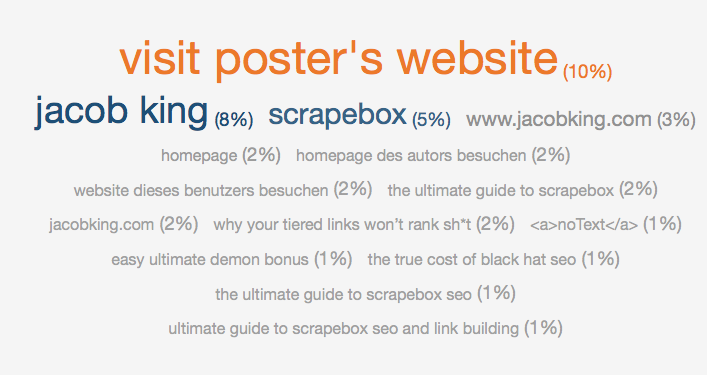 The tell tale sign for me was “visit poster’s website”, since that’s a default generic anchor in the software I’m speaking of. In fact, a buddy of mine likes to call it “Neg SEO in a box” since it’s easier to do damage than good with the tool.

As of today, some of the links have fortunately fallen out of the index. Well, at least the index that ahrefs, our link checking software, maintains. I know what ranking the attacker wanted to boot my site from and the weird part is that it’s something not very profitable. My guess is that they’re a terrible affiliate and probably working at Mc Donald’s again, but that just proves my point about negative SEO. Almost anyone can do it.

“Ultimate demon discount” was the query they wanted to knock my site down for. Ultimate demon is just another link spamming tool that I have a discount for and rank pretty well on. It’s really nothing major at all and it’s not like I’m making a killing from it or anything. In any event, there was very little effect from this negative SEO attempt. In fact, there might have been a positive one if any at all. The screenshot from analytics of my Google traffic shows no obvious effect. 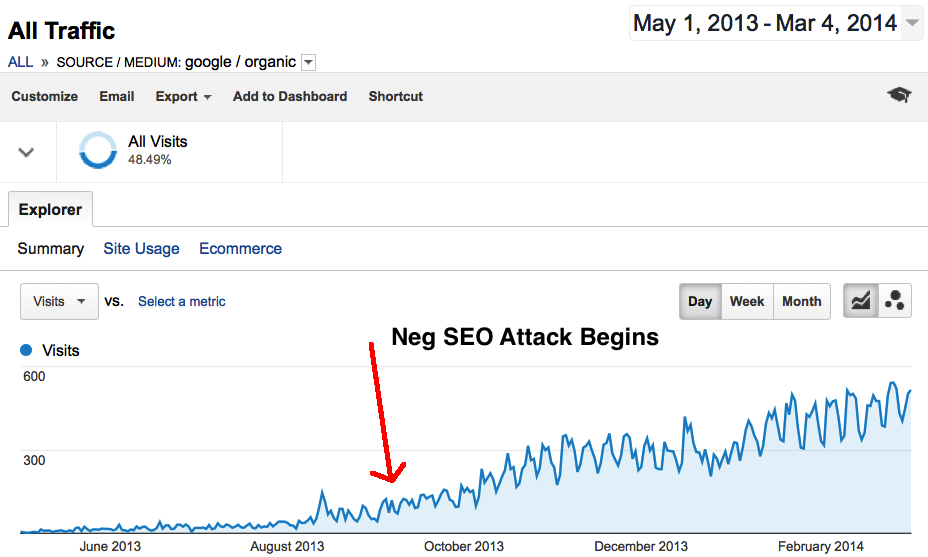 Since I’ve been playing the affiliate game for a long time, this is nowhere near the first time I’ve had a site hit with negative SEO. The thing is, this was the first time I’ve ever had a site that I genuinely cared about attacked like this. When it happened, I had enough faith in Google’s promises about negative SEO that I just shrugged it off. I figured my high quality links and other natural signals would protect me, and today the site remains unaffected. Score one for Google I guess.

Real tangible example number 1, Negative SEO did not work, it just pissed me off quite a bit and made sorting through my backlinks a real pain in the ass, but in our next example, we’ll see that might not be the case.

Now this story doesn’t have such a happy ending. It’s actually about my partner and co-founder of Audit WP, Robert Neu. In his spare time, Bert runs a website called wpbacon.com. It’s the most badass WordPress podcast ever conceived. This site is the last I’d ever expect to get attacked by Negative SEO. Bert is pretty well known for just being a stand up guy in the WP community and really has nothing to do with SEO spam or any of the shenanigans that I’m known for. 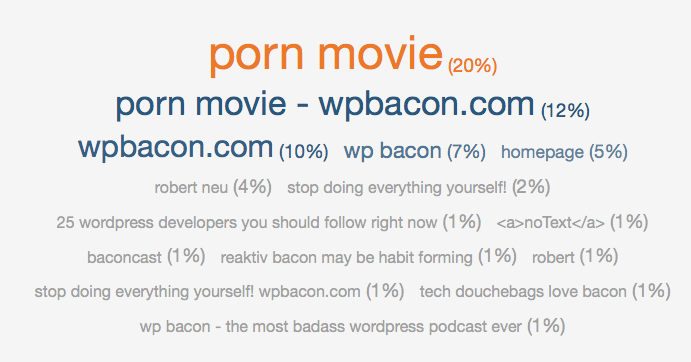 It was a bit sad to see something your buddy has worked so hard on just get totally trashed by someone for no reason. Still, after my last experience with negative SEO and the confidence Google had instilled in me, I shrugged it off and Robert kept working on more important projects.

Well, today it appears Neg SEO is definitely possible. In fact, not only is it possible, but it also works insanely fast. WP Bacon has taken a massive hit from Google, falling 50+ spots for the majority of the keywords it was ranking on, and it only took the culprit about 10 days to do it.

Here is the traffic drop:

It appears the spam was targeting an inner page on the site. Now keep in mind this keyword has absolutely zero search volume and is basically worthless so the whole thing is a bit strange, but prior to the attack the site was ranking #2 for “optinmonster coupon”.

Feel free to analyze these examples a bit deeper, wpbacon.com has some pretty solid links, and the anchor text looked perfect prior to the blast, primarily with Robert’s full name and the brand anchor text “WP Bacon”.

Some Quick Stats on WPBacon.com:

Can it be stopped? No, not likely. If they’re using public proxies (which I’ve already identified) your chances of stopping the attack are slim to none.

Can it be fixed? Maybe, but does Robert really have the time to deal with this? Probably not so the spammer wins.

About 5 minutes to cause this havoc and countless hours and heartache to “potentially” fix it, given they actually stop the blast. If the blast does not stop, any cleanup efforts are basically futile.

What does this all mean for SEOs?

We’re still trying to figure out how to move forward after this, the foundation we thought we were standing on is far from what it seems.

The answer is none, stop worrying about hats and build something so kick ass that Google doesn’t matter. But wait, we tried that and took a bitch slap anyway.

There is no right answer for this, but whatever you decide to do, keep your eyes open because awareness is critical to our evolution as SEOs. If you haven’t already watched this, here is Matt Cutts the head of Google web spam talking about negative SEO.

After drafting this post, we did start taking some steps to help remedy this situation and have had some positive results. Robert, the owner of WP Bacon, did the work so I’ll let him take over the post and explain the disavow along with showing the updated traffic stats and ranks. 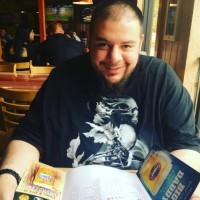 Well… Jacob has taken some kind of secret oath to never disavow a link as long as he lives. Since he’s sworn off disavowing, I had to work through this one on my own, but that’s alright. I know my way around a link or two. There’s a lot of information out there on how to recover from this type of attack. A couple of the posts that were helpful for planning a course of action were:

Since we were dealing with an obvious spam attack, I decided to just do it as quickly as possible by submitting a disavow file with the domains included in the attack. We used a combination of Webmaster Tools and ahrefs to determine the links that needed to be disavowed and submitted it to Google. Unfortunately, the spam has continued so we’ll probably need to keep doing this for a while, which really sucks. Still, the results so far have been fairly positive. We’ve recovered for a lot of the search terms we were ranking for previously and much of the traffic has returned.

Here is the updated ranking report for the keyword we showed above: 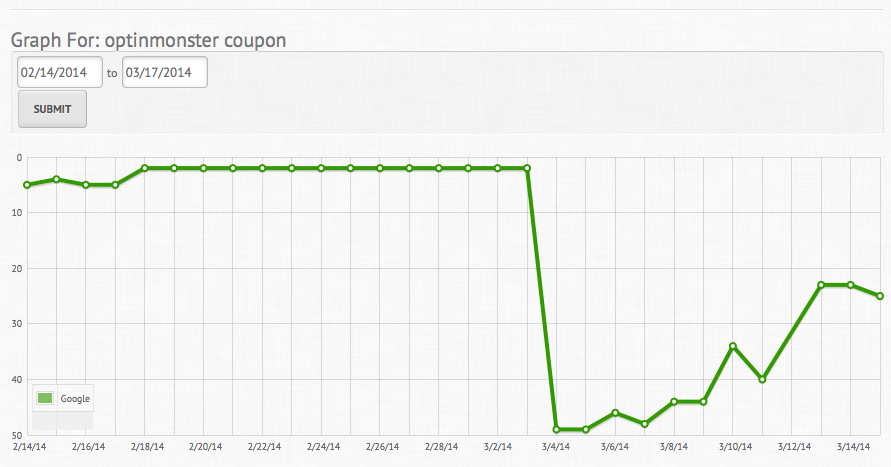 I expect that our traffic and rankings will be pretty volatile over the next month or so as we continue to sort out this mess. I know we need to work harder on publishing more high-quality content and we need to make more of an effort to get as much exposure as possible for everything we publish. That hasn’t changed. What has changed is that after going through this experience, I’ve lost a lot of faith I had in Google. I’ve always given Jacob a hard time for his approach to SEO and I’ve even tried to convince him to take a more white hat approach a few times.

I’ve always leaned more towards the kind of approach that Rand Fishkin advocates. I also like to think that while the world is flawed, most people are generally pretty cool. After this, I’ve been left questioning what’s best. As of today, I still believe in white hat SEO. I think it’s the most sustainable and reasonable approach to organic search marketing for anyone running a real business on the the web. I also think that if this had happened to WP Bacon a year from now, it would have had much less of an impact. Still, if someone like me who understands how to deal with the fallout from an attack can be shaken so easily, what chance does a small business owner stand?

This really feels like a serious problem to me. There are so many ways for people to exploit Google’s system with negative SEO that it’s almost mind-boggling. Spammers can (and do) hold people hostage with neg SEO tactics. Anyone with a Fiverr account can potentially annihilate their competition for less money than it would cost to do things “the right way”. Plus, once it happens, consultants can charge top dollar for advice on recovering from a mess like this, and that’s just the tip of the iceberg.

After dealing with this, I really feel like Google has left us holding the bag and I hope there are some solid plans in place for closing this loophole. I’m also even more committed to the idea that SEO should only be one piece of your Internet marketing puzzle. Google is an amazing traffic source and something you should always be optimizing for, but you need to diversify.

What are your thoughts?

Do you think negative SEO is a real problem or are we just paranoid? Have you ever experienced such an effective spam attack? Comment below and let us know!