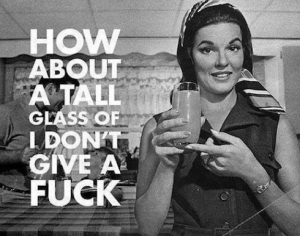 Are you ready to start ranking sites again? Like it was “back in the day” when you could practically fiddle Google rankings around and whoever spammed the hardest won the day? Well I never stopped trying, I refused to accept that the spam and jam days had come to an end.

It’s still possible, they’re still doing it, but why aren’t you? Well it’s a lot of things causing you to fail, but the demon at the gates which Google has sneakily built in is what you need to tackle. If you can conquer this demon, then you’ll have the keys back and SEO will become your bitch again.

You need to start doing SEO without giving a fuck…

That’s right, you just read the word “fuck”, if this bothers you then you definitely don’t have the stomach for ranking sites in 2014, you should probably hang it up all together. But if you feel charged up and still have that fire burning to get back to smashing rankings, today is your day.

For those with hats, bring it on in the comment section, because the following statements are probably going to piss you off a bit.

1. Content does not matter. Period, end scene, write another script. If you think it does, then Google has got you right where they want you. The game is based on the next two things.

2. Links are everything. Links, links, links, and good ones. What the shit does “good ones” mean? Man that is something so tossed up like “quality content”. Heard of PageRank? Well apparently that dude Larry Page was on to something with that metric, since it’s how you absolutely kill top rankings, PR links. And their weight has only INCREASED since Google has tightened their grip on automated spam.

Don’t believe me? Think PageRank is an outdated metric and DA (domain authority) is the beez neez? Well it’s no surprise you’re having such a tough time hitting P1.

You want some domain authority? Send me a couple URLs, I’ll smash on them with GSA search engine ranker for a week or two and hook you up with some solid DA 40+ spamalation. You see, DA does not account for spam, in fact, it scales with spam, so it’s quite possibly the most useless metric in SEO right now. On the other hand, I’m really liking Majestic SEO’s Trust Flow or TF, not the end all be all but it’s the best we’ve got currently.

Active PR does not scale with spam, try to GSA spam me a PR 6 domain, it’s not happening. When you realize that, you might start reconsidering how you go about getting links.

3. Anchor Text – Now that points one and two are starting to sink in, you’ll hopefully soon realize that anchor text is Google’s last line of defense next to confusing you with FUD and propaganda. And this is where I hope the power will start to shift back for a small % of us. Google is completely fucked, the reality is good spam ranks and bad spam can literally remove sites in a matter of weeks.

So with that all said, what is your best move?

It’s NFG or “No fucks given SEO”. Buy and cheat your way to the top, do whatever it takes to be #1, the guys telling you that’s not what this is all about have given up and stopped fighting. And what have they been rewarded with? More scrutiny and more slaps for the stupidest of infractions. Myblogguest? Are you fucking kidding me? Got me scared to even link to the damn domain.

Google, you suck, almost as much as FaceBook. But don’t worry, you’re closing in fast.

@IMJacobKing ROI on legit passed into the red sometime last year. If it makes money and is not illegal G owns all the organic ranks

The above tweet from my buddy Chris sums up the reality of where SEO is in 2014. The reality is that Google has lulled us into a false sense of security that can be taken away by your competitor who decides to reward you with a fiverr spam blast for your great content efforts.

It’s time to start doing NFG SEO and realizing what’s actually happened with the game over the last few years. With penguin, the entire paradigm shifted, what we were ALL doing to rank sites suddenly backfired and became the very thing that caused us to tank. Not only that but it spawned a full on industry of link cleanup tools and services. Link cleanups? Are you fucking kidding me?

And now where are we, pacing around like a bunch of lost sheep considering dropping a nice neatly placed message to Google on every link we build (the nofollow tag)? Not me, not now, and not ever. Because you see Google, for me, I just don’t give a fuck. I stayed the course, I’m still spamming and ranking sites, in fact it’s easier than ever now that you’re leaning on authority links so goddamn much.

If you’d like to join me, then today you must let go, let go of everything you’ve been indoctrinated with and stop giving a fuck, build links like you just downloaded your first copy of Senuke and you’re ready to spam the world. Test that algo every day like it’s your last and please stop listening to him. It’s much more than the tactics or the blog networks, it’s the mindset they’re after, it’s NFG they want to stop, so come on SEOs, it’s time to stop giving a fuck.