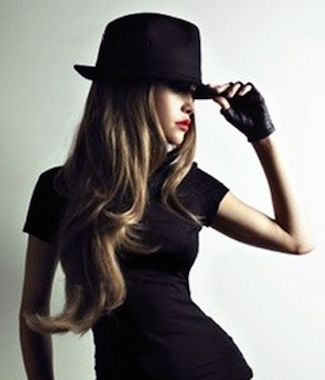 Welcome folks, it’s the beginners guide to blackhat SEO, the mysterious art of spamming the SERPs. Where does one begin and where does one end? When you have hundreds of different opinions just on what exactly “blackhat SEO” even is, how can one begin to learn this dark art?

Well hopefully you’ll find after reading this guide that the definition isn’t so rigid nor is the practice. In the past I’ve written about my view on what is the right hat for SEOs, I call it “make money hat“. It’s basically my way of saying just shut your mouths and hustle, the guy pushing the most numbers at the end of the month/quarter/year is the one doing SEO the best. Not the white hat toting conference speaker who will make you take out a second mortgage on your home while barely moving the needle. Sorry, but it’s enough already guys.

The Google Web spam team and Mr. Matt Cutts (while recently inactive publicly) have long been at war with search engine spam. The first thing you need to do is take a look at Google’s stock price along with current market share of search engine use. Then consider this engine is the main revenue driver for one of the biggest corporations in the world.

Yeah they probably don’t want you to fuck with that. And that is exactly what any type of aggressive SEO is doing, messing with their lifeblood which they’ve hired a damn army of geniuses to algorithmically protect. Don’t get it confused, I’m not trying to dissuade from blackhat SEO, more trying to explain where you stand in the game so you can act accordingly. Google is not your friend, Google is no SEOs friend for that matter, they abuse us and we abuse their search engine, round and round we go.

Here is a nice overview of all the spam techniques that have developed over time. Along the way we have also had many key updates which have changed the landscape of blackhat SEO. There have been different eras we’ve gone through, from a free for all, to slowly tightening things up, to a more controlled and sophisticated game that we play today.

The important thing to remember, is as long as there is a search engine with rankings are predominately based on links, then there will be a way to game it. There might be a big change which knocks everyone on their ass, but we just keep going and rank again eventually. It’s important to have a general understanding of the history of search spam but you don’t need to become a historian. The sooner you start spamming and creating your own data, the better. Your own set of historical data is what you want to be going by.

Probably the first place you’ll get started is with forums, but many people have the question of which are legit and which aren’t? Oh man, you’re asking the wrong question. None of them are free from bullshit, but they all have some value, especially when you’re just getting started. There is a wealth of knowledge to be gained you just need to approach it right. Don’t think you’ll find some exact road map or that someone is going to spoon feed you some special secret sauce, let’s try not to forget they’re public forums. But that doesn’t mean I haven’t found plenty of gems and insights along the way. Here are the main forums:

Now you’re going to use our friend Google and some simple search modifiers to better navigate the content on these forums.

We’ll be mainly using the site: modifier and our “keyword” in quotes, you’ll also want to use the date filter sometimes. 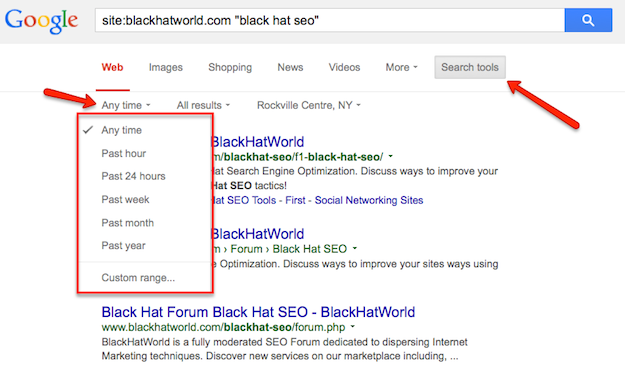 With this simple technique you’ll be finding information much faster than if you were navigating the actual forums themselves. You’re going to cover everything on the damn Internet if you ever plan on getting good. No, you’re not the Bobby Fisher of blackhat SEO, you’re going to have to hustle your way to the top. Soak up everything you can while getting started and eventually you will develop a strong bullshit filter. Until then, you really have to just dive in head first, the forums listed above will have enough bits and pieces to get you rolling. Quite simply, the information is out there waiting for you to take it. Are you man/woman enough to take it?

Meh, there really isn’t much here. Most good black hats either wind up doing something else with their cash and eventually losing their edge, developing a drug problem, getting smashed by Google, or a mixture of these things. This is why you won’t find too many active blogs about black hat SEO stuff, it’s very difficult to walk that line of what to share and what not to share.

With that said, an honorable mention goes to BlueHatSEO.com the old blog of Eli Alioso, a fucking legend in the SEO world. This dude was ahead of his time, for real, there are posts years old which still apply today but people are too lazy/retarded/brainwashed to test anything.

If you’re wondering what is up with the site nowadays, Eli being the beast he is gave it away as the prize for an SEO competition on Wickedfire. Then a gentleman under the name of “Skohh” pulled out some brass balls and won the competition to be pleasantly surprised with Eli bestowing the domain upon him. Looks like he’s still in the works of getting the main site going, but you can use archive.org in the mean time.

Read every single post on there, every last one. Here are some of the top ones I pulled by putting bluehatseo.com into ahrefs.com the preferred backlink checker, going to top pages, and sorting by referring domains. This is a quick and dirty way to see some of the most popular content on a domain, we’re assuming the best work has more links. 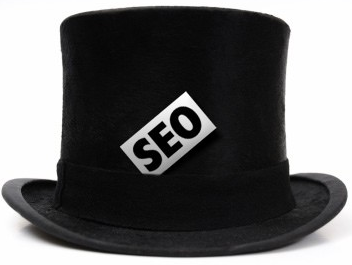 So what are the people using today? Here are the two big pieces of the game:

GSA Search Engine Ranker (similar to Xrumer, Ultimate Demon, SENuke, etc, but GSA is the best tool for the job) – This is for spamming links of all kinds. There are a lot of pieces that go with like proxies, captcha solving, and content creation but this is the main software to master.

PBNs – Private blog networks and all that goes with.

While we’re on the subject some people seem to be a bit confused about the definition of “private” and “public”, so let’s clarify.

Private: belonging to or for the use of one particular person or group of people only.

Public: accessible to or shared by all members of the community.

Take those definitions in, seems SEOs have had some serious trouble differentiating private blog networks from your neighborhood BST selling the magic Google rank sauce that will help you rank for anything (see that’s public, go re-read the definitions if it still doesn’t make sense). Now this isn’t to say there hasn’t been and aren’t any powerful public link networks currently, just classify and use them accordingly.

Sure there are many other moving parts but these are the two big link sources for spamming ranks. There are others of course; hacked links, CMS exploits, etc., but GSA and PBNs are the meat and potatoes of common Blackhat spam. This is a more comprehensive list of tools that I personally use, the whole lineup.

Often times you’ll read something about SEO and think to yourself, do you even watch SERPs bro? The data is right there for anyone to analyze but most people have their heads too far up their asses to see it. Go take a look at some heavily spammed SERPs; payday, phrama, gambling, designer, replica, the bigs.

Oh yeah, good times. If that stuff excites you then you’re in the right place. Recently there has been a tool released by a respected marketer in the SEO community, “CCarter”. The tool is called SERPWoo and it tracks the top 20 search results over time and plots them for you. This allows you to easily spot new competitors entering the top 20 that are making big jumps, big drops, etc. A bird’s eye view of the SERPs so you can attempt to reverse engineer them and gain strategic insights.

Here is screenshot of one keyword I watch that has some cool activity:

A little hectic yes, but let me clear it up for you.

Boom, now what did those little tricksters do to get up on that page 1 pony? Sorry bros, gonna have to find these gems on your own.

If you haven’t started to see it yet, even for blackhats, data is one of our most important resources. This is what guides our actions and makes us stronger over time. Here is a amazing quote that really sums it up:

“Only trust the data that you see yourself, that you caused yourself, otherwise it’s hear-say.” -Bofu2u

That is some of the most badass shit I’ve ever read in SEO, take it in folks. I found the quote here in a post by CCarter which he says was originally from Bofu2u, a respected blackhat and automation expert.

Now it should go without saying but since this is a beginners guide we’ll have to be brutally noob, don’t use Google products bros, just don’t.

Analytics, Gmail, Google docs, and Google Drive are all out.

Nah, I’m not wearing a tinfoil hat. Don’t worry, it’s just best practice to avoid their services, no need to give it another thought.

Here are the alternatives that I use:

See, we can accomplish the same thing without using the enemies tools.

For rank tracking ProRankTracker is my preferred tracker, of course you’re going to need to track rankings so let’s not forget about that. 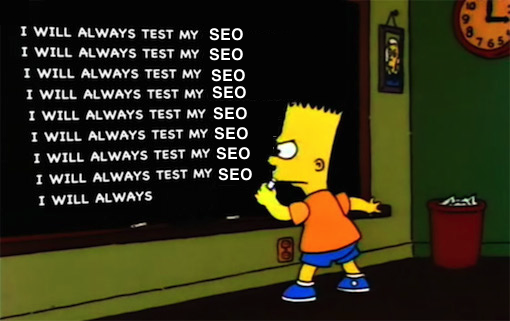 So what are you waiting for? That is the big question, if you don’t finish reading this guide itching to throw up a new site and test something than this probably isn’t for you. But if you’re on the journey then this should help you get going, start soaking up everything you can and take action, today.